Sex, lies, and power = lies about power and sex.

Can we please stop sounding the depressing alarm claiming that all powerful men are destined to be cheating husbands?

Yes, in recent history we’ve had Anthony Weiner and Arnold Schwarzenegger. But we’ve also had Barack Obama and Mark Wahlberg. However you choose to feel about the debt ceiling or The Fighter, these are recently-newsworthy examples of powerful men who have stayed happily married without getting caught up in a sex scandal. And they’re far from being the only ones.1

The problem with proclaiming that there’s an inextricable link between power, maleness, and cheating is that it implicates both power and masculinity as unavoidable evils. Fact is, that’s not really fair – or accurate.

What’s Wrong With All The Men?

Based on the cultural lexicon, it certainly seems like men are the only ones messing up.

Image from the recent TLC special "Sex, Lies, and Power"

However, blaming the power+cheating epidemic on maleness is incredibly short-sighted, for one glaring reason: As a society, we’re pretty terrible when it comes to gender equality. One recent study from the journal Psychological Science actually reveals that higher levels of power are linked to higher levels of reported & intended infidelity…in both men and women. Gender plays no role whatsoever in the link between power and cheating; in fact, gender may not even play a role in cheating, period. The more power a man or woman possesses, the more likely he/she is to report cheating in the past or intending to cheat in the future, most likely due to power increasing confidence in one’s ability to attract a romantic partner.3

Here’s the main flaw with the “man + power = cheating” logic: Sure, men and women have basic biological differences, but men also tend to have more power than women. Past research has reported that men are more likely to cheat than women, and evolutionary theorists have put forward plenty of biologically-based explanations revolving around reproductive strategies (most notably the idea that men are motivated to mate with as many women as possible to spread their genes, while women are motivated to bond with a single partner to increase the likelihood that he will invest resources in their children). But the problem with this explanation, though interesting and intuitively compelling, is the fact that we don’t live in a society where our behavior is solely determined by genes and hormones. In a culture where women don’t have as many opportunities to obtain the same jobs, opportunities, and salaries as men, women have traditionally had to rely on their husbands (or fathers) for economic survival. When your marital partner is your financial lifeline, there’s a lot more to lose if you get caught between the sheets with someone else; the risks don’t really outweigh the benefits as well as they might for the partner making more money, who would hardly suffer as much economically if the marriage were dissolved. When people report that “men are more likely to cheat than women,” they are really reporting the simple fact that “powerful people are more likely to cheat than less-powerful people.” It’s impossible to separate the two concepts when you live in a society with a gender-based power imbalance.

According to research by graduate student Christin Munsch, there’s even reason to believe that the entire assumption of power –> cheating is more complicated than it seems.4 Of course, the previous study (among others) suggests that power leads to increased infidelity, which implies that taking power away from men would lead them to be more faithful. However, Munsch has found evidence suggesting that it’s dangerous at the other end of the spectrum as well; according to her research, men who are economically dependent on their wives are more likely to cheat as well (perhaps explaining why Jesse James cheated on Sandra Bullock just as her career seemed to hit its peak at the 2010 Oscars). Powerful men cheat, powerless men cheat, powerful women cheat – maybe the relationship isn’t as clear-cut as everyone’s been assuming.

Or maybe we’re so confused because we aren’t actually accurately weighing – or even receiving – all of the important information.

In their classic Science paper from 1974, Amos Tversky and Daniel Kahneman described some of those tricky little mental shortcuts that allow us to quickly make decisions and evaluate the world around us, otherwise known as heuristics.

We know that five personality traits aren’t much to go on when assessing the likelihood that a person has any given career. However, based on what we know about Steve, most people would still consider it safe to assume that he is more likely a librarian.

But…why is this the assumption? After all, there are far more farmers in the world than librarians. If I hadn’t mentioned anything about Steve’s personality and simply said, “Steve is a person. Is it more likely that he is a librarian or a farmer?” it would make the most logical sense to guess “farmer,” much the same way that if I had 5 red balls and 2 blue balls in a jar and asked you to guess which color my next random selection would be, your best guess would be “red.” However, providing librarian-consistent adjectives about Steve distorts people’s logical ability to factor in the effect of simple probability. This is not to say that certain personality traits don’t make it more likely that someone would favor certain careers; what it does mean, however, is that people overestimate the importance of how well someone represents a given category, and underestimate the importance of base rates and simple statistical probability. This is the power of the representativeness heuristic. The aforementioned traits might be an important factor in assessing the likelihood that Steve is a librarian (or a farmer), but ideally you should be factoring in the number of librarians vs. farmers in the country as well.

Sure, personality plays a role in risk-taking behavior. Sure, there are risk factors. But there are also base rates. If 25% of married men have cheated, that means that 75% haven’t – and it’s highly unlikely that all 75% happen to be poor and powerless.5

What does Barack Obama have in common with asthma?

So, it still might seem like powerful men are always cheating. But this also doesn’t take into account the simple fact that when the powerful men aren’t messing up, no one really cares about their marriages. After all, try to remember the last time you saw a newspaper headline proclaiming, “Barack and Michelle: Still happily married.”

The same effect was demonstrated in 1978, when a team of researchers asked participants to guess how many people died each year from various different causes. As it turns out, people far overestimated the frequency of those rare, newsworthy events that stood out and merited extensive news coverage, and underestimated the fatality of unreported causes. For example, homicide, despite being 23% less frequent than suicide, was reported in the news 9.6 times as often; sure enough, participants in that study were far more likely to think that more people died per year from murder than from suicide. And, in one of the most drastic examples, participants were more likely to think that people were more likely to die from tornadoes than from asthma, and rated asthma as only slightly more probable of a killer than botulism; in reality, asthma was 20 times more likely to kill someone than a tornado, and over 900 times more likely than botulism. 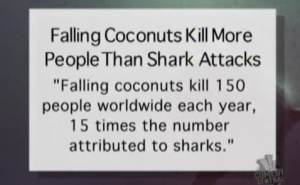 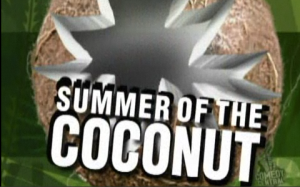 In a classic 2002 episode of The Daily Show, Stephen Colbert used the availability heuristic to poke fun at what newscasters were deeming the Summer of the Shark, pointing out that more people actually die of falling coconuts each year than shark attacks.

So, sure, it seems like all of the powerful men are cheating. But that’s because newscasters won’t waste their time talking about the powerful men who aren’t, just like they won’t talk about the people who die from asthma. It’s simply not as interesting.

Next time you see a pundit crying out about the evils of powerful men, just think about Barack and Michelle. After all, to put a spin on a popular phrase: Don’t be a heuristic.

2. Setting aside Naomi Wolf’s rampant gender essentialism, her misinterpretation of neuroscience was also expertly debunked by Vaughan Bell in Mindhacks and subsequently reprinted by CNN.

3. For whatever it’s worth, the researchers also found no evidence suggesting that the link between power and infidelity had anything to do with lower levels of perceived risk, higher feelings of ‘invincibility,’ or higher levels of psychological distance between married couples when the power imbalance was exacerbated. These findings slightly contradict previous research linking power to risk-taking, optimism, impulsivity, and psychological distancing, but supports previous literature suggesting that power leads to increased approach-related behavior, confidence, and overperception of other people’s sexual interest.

4. I was not able to find any peer-reviewed, published articles on this research, so it can (and should) be interpreted with that in mind, but there is a list of links for popular press coverage here, and many of the articles discuss the author’s study methodology.

5. In this study, the overall prevalence of prior infidelity was close to 25% across both men and women, with no significant gender differences. It’s hard to pin down an accurate statistic for national infidelity rates, but most numbers hover around this percentage aside from the occasional “shocking” report of 60-80%, though percentages this high usually come from polls run by agenda-driven sources (like those seeking to “defend” marriage, children, families, etc.) The reported study was also conducted with a Dutch sample, but the authors note that their attitudes towards infidelity/marriage are fairly representative of many other countries, and there’s no reason to believe that their findings would differ based on country of origin. If anything, different research findings would actually support the argument that the link between power and cheating is culturally mediated, rather than being due to any essential differences between men and women.

2 responses to “Sex, lies, and power = lies about power and sex.”