Zombies and Volleyball: The Benefits of the Bystander Effect 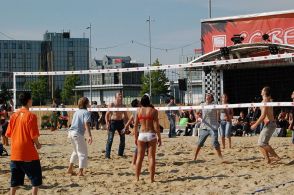 It’s summer. You’re playing a relaxing game of beach volleyball with your friends, and it’s the opposing team’s turn to serve the ball. As the player calls out the score and sends up a graceful serve, it soars over the net in a slow, arching motion. You watch as it glides down slowly towards your side, falling, falling…

And then smacks down into the sand.

Right between you and three of your teammates, as you all stand in place staring at it.

So why exactly didn’t any of you go for the ball?

An infamous parable in social psychology is that of Kitty Genovese, the woman who was supposedly murdered in Queens in front of dozens of onlookers who failed to do anything to help, each person assuming that the other bystanders would assume responsibility.1 This phenomenon is known as diffusion of responsibility or the bystander effect — the larger the size of a group gets, the less likely it is that any one person will intervene or take action in a given situation. If the volleyball is coming straight towards you in a corner, you know that you have to hit it. If it’s falling towards the middle of a four-player group, each player often assumes that someone else will get it…unless someone has the foresight to call, “Got it!”

A number of great blog posts have already dissected the negative effects and implications of the bystander effect, including how to reverse the effect and how to get help from a crowd when you need it. So, instead of focusing on those aspects, today I’m going to take a slightly-less-common approach — I’m going to discuss a couple of ways that you could potentially use your knowledge of the bystander effect to your (safe and legal) advantage. We began with an example of how the bystander effect could be used to your advantage in a game of volleyball; although it may seem counterintuitive to aim the ball directly at your opponents, you may have greater scoring success if you can get it to land in the middle of a pack. Are there any other ways that the bystander effect can actually help you?

Unfortunately, the time has come: It’s the zombie apocalypse. You’re approaching a zombie hoard with a group of several other brain-intact companions, and you need to figure out the best way to run past the zombies and make it through alive.

Well, there’s a good chance that a solid understanding of diffusion of responsibility can help you with that. 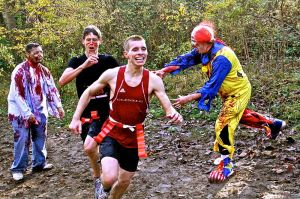 This hypothesis was tested recently at the Run For Your Lives Zombie 5K, where I and a few thousand others attempted to complete a 5K course filled with volunteers who were dressed up like zombies and trying to steal our “lives” (aka flags on a belt around our waists). Sure enough, most of the runners attempted an obvious strategy: Attempting to run around the zombies, skirting off to the edge of the path and trying to dodge them as quickly as possible. The problem with this approach, however, is that the zombie closest to the edge clearly recognizes that it is his or her responsibility to take you down.

Instead, using my knowledge of social psychology, I tried a different, seemingly stupid tactic: Running directly through the middle of the pack. Sure enough, every time I tried to run around the pack, the zombie on the end reached out and grabbed one of my flags…but every time I sprinted straight through the middle of a giant pack of zombies, even though you would logically think that this would be the quickest way to lose your flags, the zombies all stood there and simply watched me run by, expecting one of the others to be the one to “take me down.”

Lo and behold, I was able to make it through alive with one of my flags still intact, mostly thanks to my social psychology know-how (and a good amount of sprinting, to be fair).

So, if push comes to shove and it’s time for the Zombie Apocalypse1 (or if you simply find yourself wanting to compete in a Zombie 5K), use social psychology to your advantage: Run straight through the pack, instead of trying to dodge around it. Diffusion of responsibility can work to your advantage.

White Knights and Damsels In Distress

In a 2008 study, Mark Levine and Simon Crowther had a female confederate enter the room while another study was going on and ask the male experimenter if he could help her recruit subjects for her study. The experimenter then angrily dismissed her, and she waited outside in the hallway. The researchers subsequently noted how many of the participants offered to help this female graduate student after completing the study — in other words, how many of them helped her, even though they were in a group and diffusion of responsibility would suggest that they would each assume another group member would be the one to help.

Not only does this tell us about when the bystander effect does (and does not) impact our behavior, it also says something pretty sad about the effects of gender stereotypes on our behavior. Note that this wasn’t an issue of safety – it can’t be argued that it was “less safe” for a woman to intervene (as one might argue if the outcome of interest was, say, calling the police about a scene in the street or breaking up a fight). The experiment simply studied whether or not people offered to help out in another person’s study. 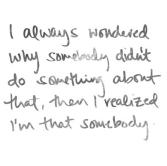 These gender differences offer two ways in which we can think about using the bystander effect advantageously. First of all, if you are attempting to recruit people for help with something — whether it be for your study, an activist cause, or a class assignment — you don’t want to waste your time targeting every possible group of people with pleas for assistance. Rather, you might want to specifically target the groups that are composed of a) multiple women or b) multiple women and 1-2 men. That way, you can ensure a greater likelihood that one of the women (in the first group) or one of the men (in the latter group) will volunteer to help you.

The principles of diffusion of responsibility and the bystander effect have earned a bad reputation, and it’s been overall deserved — most of the time, discussions of these phenomena revolve around situations that are truly dangerous, such as onlookers failing to halt a crime being committed in a crowded area. In no way am I attempting to insinuate that anyone should “use” the bystander effect to their advantage when doing something illegal or immoral, like committing a crime. However, as with everything in psychology, these principles don’t merely apply to the most extreme examples of behavior. There are plenty of opportunities to use the bystander effect to your safe, legal, and non-felonious advantage, whether it be in a volleyball game, a zombie apocalypse, or even (potentially) playing a role in changing gender role stereotypes. Hey, you never know.

1. Although this story is a staple in Intro Social Psych classrooms around the country, more recent evidence has suggested that the “Kitty Genovese Case” may not have gone down exactly as it has been legacized. See this excellent post at the BPS Research Digest for more details. However, even those involved in debunking parts of the Kitty Genovese case have steadfastly claimed that the “bystander effect” is real and dangerous, and specific details about the Genovese case should not undermine this fact.

2. Yes, although Zombie 5Ks consist of living people with human reasoning capabilities, actual zombies would probably not follow the “rules” of human psychology. Let’s just go with it.

Levine, M., & Crowther, S. (2008). The responsive bystander: How social group membership and group size can encourage as well as inhibit bystander intervention. Journal of Personality and Social Psychology DOI: 10.1037/a0012634

This entry was posted in Sex and Gender, Social Psychology and tagged Activism, Cooperation, Gender, Norton, Zombies. Bookmark the permalink.

13 responses to “Zombies and Volleyball: The Benefits of the Bystander Effect”