The Zombies In Our Midst 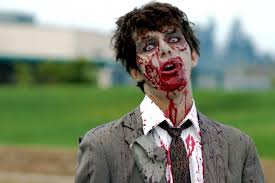 Every Halloween, we find ourselves surrounded by zombies, vampires, ghouls, and other mythical monsters. But even though this is the one day each year that we consciously realize we are surrounded by these creatures (at least in their human-costumed forms), are we surrounded by more common forms of these monsters every day without even realizing it?

Let’s take a deeper look at what I mean…

According to lore, zombies are corpses that have been reanimated, either through witchcraft, supernatural forces, or a biological virus, to become an “undead,” walking creature determined to feast on human flesh. A zombie apocalypse, therefore, is the mass takeover that would occur when zombies start to overrun the earth, chomping down and taking new victims en masse.

When it comes to zombies, it’s often difficult to know how to think about them. Are they still (in some way) human, or are they simply mindless, flesh-eating automatons? If your friend, relative, or spouse was “turned” into a zombie, would you still see him or her as the person that you once loved? Or would you recognize that this was a new creature, not the caring person that you once knew?

In everyday life, the process of deciding whether or not to ascribe human qualities like thinking, feeling, and intentionally acting to people, animals, or objects can be thought of as anthropomorphism, or mind perception. Though it seems easy enough to determine which objects can think & feel and which cannot, it can be a surprisingly variable endeavor. When people engage in anthropomorphism, they often perceive minds in things that should not really have human “mind” capacities, like animals, nature, or technological gadgets (think about that “evil” photocopier that never seems to work when you want to use it). On the other hand, when people do the opposite and downplay the minds of human others, they are engaging in dehumanization.

Several things can make people more likely to anthropomorphize others and perceive minds where they may not exist. First of all, people might be more likely to over-perceive “human minds” in non-human sources when the sources themselves are behaving unpredictably, especially when the perceivers are distracted or too busy to think hard about the causal chain of events. If you’re faced with an unpredictable computer, for example, you might be more likely to spontaneously think of it as “annoying” or “mean,” even if you consciously understand that the computer is not intentionally trying to mess with you (one would hope). People might also over-perceive minds when they feel powerless, lonely, or have a chronic “need to belong.” People who want to socially connect to others, either for intimacy or for valuable resources to regain power/control, might be chronically motivated to see minds in atypical sources like computers, pets, nature, or the supernatural.

On AMC’s “The Walking Dead,” character Morgan Jones struggled with the idea of killing his zombie wife, despite knowing that she wasn’t the same person he had once loved. Feeling lonely and isolated might have made it even more difficult to see her as a mindless creature.

Perceiving minds (and therefore the capacity for behavioral intentionality) can help us satisfy the inherent motivation to “make sense” of a senseless, unpredictable world. In one study, Adam Waytz and colleagues had participants interact with a robot (which they knew was a robot) by asking it ten yes-or-no questions. Unbeknownst to the participants, the robot was generating random answers, either predictably (it answered “yes” 80% of the time) or unpredictably (it answered “yes” and “no” equally often). When participants interacted with the unpredictable robot, they were more likely to attribute human-like, anthropomorphic qualities to the robot, saying that it was more thinking, desiring, intentional, and emotional than the predictable robot, even though participants knew that both of the responders were robots and that they were generating random answers. Furthermore, when participants in a follow-up study were exposed to a separate robot, the ones with the goal to predict the robot’s actions were more likely to anthropomorphize the robot by seeing it as emotional, intentional, and capable of human-like thought.

This tells us a couple of things. First of all, in the event of an actual Zombie Apocalypse, we might be in a fair bit of trouble. If you think now that it would be difficult to axe someone you once loved in the brain before they eat you alive, think about how much more difficult it would be if you were living in an unpredictable enironment (as a post-apocalyptic world, almost by definition, must be) and therefore even more likely to ascribe human-like, thinking, feeling capacities to your now-undead friends and relatives.

Second of all, the reversal of this phenomenon points to the dismal ways in which we might actually “zombify” the people around us. Just as anthropomorphism occurs when people ascribe human-like, thinking/feeling qualities to the non-human entities around us, dehumanization is the process by which we do the opposite and “represent human agents as nonhuman objects or animals…hence denying them human-essential capacities such as thought and emotion” (Waytz et al., 2010). Just as people who are lonely might be more likely to anthropomorphize, in a frightening inverse of this phenomenon, those who are socially well-connected might actually be less likely to perceive human minds in others, therefore dehumanizing and objectifying them. If someone feels well-connected, they might have a lower amount of motivation to seek out social connections, so they might be more likely to dehumanize others, particularly outgroup members. In fact, people are particularly likely to dehumanize certain types of outgroups — in particular, drug addicts and homeless people are frequent “dehumanization” targets. Finally, just as feeling powerless or like one is living in an unpredictable world can increase anthropomorphism, feeling powerful or like one is living in a stable, predictable world can increase dehumanization as well.

With this in mind, it becomes easy to see the everyday zombies in our midsts. When we think about an actual zombie apocalypse, we realize that it might be even harder than we now think it would be to axe our friends and families who have been bitten, as the loneliness, unpredictability, and general sense of powerlessness would make us even more likely to see our once-living, now-zombified kin as thinking, feeling humans instead of rabid, undead monsters. However, we may not have to wait for an apocalypse to understand what it feels like to see the people around us as zombies. If we feel powerful, socially connected, or like we are living in a predictable world, we may be more likely to dehumanize (or “zombify”) the people around us…especially if they are members of an outgroup.

One response to “The Zombies In Our Midst”